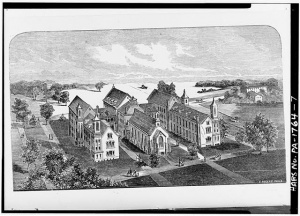 Episcopal Hospital, originally known as 'The Hospital of the Protestant Episcopal Church of Philadelphia', is parting of the larger campus of Temple University Hospital located at 100 East Lehigh Avenue, in North Philadelphia. It is a private behavioral health hospital that has been in continuous operation since 1851, with its current facility being built in 1933. The complex, as it originally stood, occupied a square of ground. This building, whose doors are open to patients of 'all creeds and nationalities, has a capacity of three hundred beds'. It was purposed by its founders to be a medical facility; however, when it became appropriated by Temple University it was resigned primarily to the function of inpatient psychiatric care; The facility also has an Emergency Department and inpatient medical floor for patient care. The facility also houses one of Philadelphia's Crisis Response Centers, which is an assessment center for emergency psychiatric issues, allowing patients to be placed for either psychiatric or substance abuse issues.

The original Episcopal Hospital's charter was put forth by the Protestant Episcopal Church of America, in the Diocese of Philadelphia following a lengthy meeting of laity and clergy. It was elected that a facility to treat the poor and ill of the city should be constructed in Philadelphia's northern quarter. The grounds, consisting of a square (six acres), for the original hospital were donated by the daughters of John Leamy, a local wealthy business mogul, and episcopal parishoner.

The current Episcopal Hospital holds a 118 inpatient beds, 74 for acute care and 44 for extended acute, as well a large outpatient clinic. The City of Philadelphia is contracted with Community Behavioral Health (CBH) to employ Episcopal's crisis center for 302 county commitments, along with that of: Fairmount Hospital, Friends Hospital, Brooke Glen Hospital, and Pennsylvania Hospital. The current campus also holds Temple University's School of Nursing.