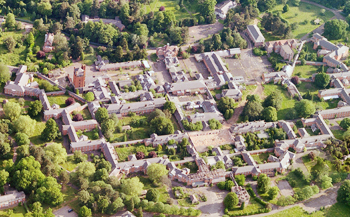 With the Essex County Asylum becoming extremely overcrowded, a plan for a Second Lunatic Asylum for Essex is developed. Construction for the Second Essex County Asylum begins on June 21, 1910 on 300 acres of land north of Colchester, in the Parish of Mile End (Myland) known as The Severalls. On May 27, 1913 the Second Essex County Asylum opened it's doors which was designed for 1,800 patients and adopts the echelon layout. But unlike the modern British hospitals, patients were separated according to their gender even doctors, nurses and other staff were divided by their gender. Although, it was not long before this changed and the wards were divided based upon the type and severity of the patient's mental condition.

With the outbreak of World War I in 1914, the hospital is commandeered by the military initially as a Military camp but as the war progressed and intensified it became a Military Hospital to care for the soldiers whom were wounded both mentally and physically. Approximately 3,600 soldiers are stationed at the hospital, on the grounds as well as the satellite villas within the grounds. But in 1919 the hospital is decommissioned from Military use, and returns back to it's original civilian use. In 1928, the Gamma building is constructed north of the main hospital and due to overcrowding several more satellite villas are erected from 1930 to 1935. Also, in 1930 the Essex County Asylum is renamed to Severalls Mental Hospital.

During the 1950's experimental treatments were carried out on the patients, including ECT, insulin shock therapy and the controversial Leukotomy and Lobotomy. A change in management during the 1960's saw reforms introduced including the creation of art and music therapy programs and the widespread use of drugs and medication. The Mental Health Act in 1959 abolishes the use of the title "Mental Hospital", although the hosptial had already been renamed "Severalls Hospital" in 1950.

In the early 1990, Severalls Hospital is closed as a psychiatric hospital following the closure of other psychiatric institutions. However, a small section of it did remain open until March 20, 1997 for the treatment of elderly patients suffering from the effects of serious stroke, as a temporary building for nearby Colchester General Hospital.

In December 2010, the nearby new A12 junction was officially opened. The "Stadium" junction and roundabout are located just to the north of Colchester United F.C.'s Stadium, on land formally known as Cuckoo Farm (used up until the late 1950s / early 1960s as the Hospital Farm). With the opening of this new junction, this is a significant step, as this will enable the new link road to be built between "Stadium" roundabout on Axial Way, connecting with the Northern Approach Road, just north of Mill Road. The proposed route of the link road will pass over the long-demolished Iris House, to the south of Orchard and Eden Villas, literally through Fernholme Villa, before crossing the old Sports Ground and joining the Northern Approach Road. Once built, this will "open up" the re-development potential for the former Hospital Site. At present, it is not known the extent of retention of the existing Hospital buildings, apart from the Administration Building, which is Grade 2 Listed. It is hoped that the main "ranges" / Ward Blocks will be kept and converted, along with the Water Tower, which is considered to be an important and historic landmark.

As of May 2011, Colchester Borough Council's Planning Committee have given their approval for the erection of 248 new homes. The location is on land currently owned by H.C.A. (formerly English Partnerships), and although is not directly on the site of the Main Hospital, is recognised as Phase 1 of the redevelopment of the former Severalls Hospital site. It is understood that this first phase is to be sited to the north-east of the Main Hospital, in fields bordering Mill Road and Tower Lane (next to the old Myland Hospital Water Tower.)

Book: Madness in Its Place: Narratives of Severalls Hospital, 1913-1997[edit]

The book Madness in Its Place: Narratives of Severalls Hospital, 1913-1997 (1998) by Diana Gittins has been the most comprehensive study of this institution to date. The project was initiated in the mid-1990s, by the North East Essex Mental Health Trust, which wanted a social history of the hospital to be written prior to its closure. Joan Busfield, Professor of Sociology at the University of Essex, was a member of the trust and put forward the name of a former PhD student of hers, Diana Gittins. The main reason was that Gittins’ background as a social and oral historian was deemed more suitable for this kind of work. Funding was secured by the Trust and the study commenced in May 1995 for a two-year period.

Gittins designed and conducted the study with little interference from Busfield who assumed a supervisory role. The investigation drew upon both qualitative and quantitative material to address areas such as, gender divisions in staff and patients, in-hospital power relations, the patterns of admission and discharge, quality and variety of treatments on offer, and the daily lives and routines of patients and nurses on the wards. Furthermore, it provides an ‘insider’s view’ of the de-institutionalisation years and the passage from residential to community-centred care.