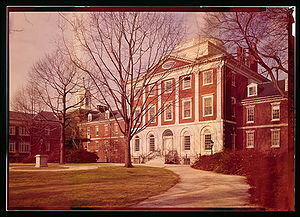 The Pennsylvania Hospital was founded in 1751 by Dr. Thomas Bond and Benjamin Franklin. Chartered by the Colonial Government, the Pennsylvania Hospital has the distinction of being the first hospital in America to care for the sick poor. The original building on Eighth and Pine Streets, completed in 1755, was expanded over the years, as demand for a larger facility grew. Today the Hospital maintains the original building, as well as many others, as part of its campus.

In 1755 the cornerstone was laid for the East Wing of what would become the hospital's permanent location at 8th and Pine Streets. Patients were first admitted to the permanent hospital in 1756. The site continued to grow through the years with the addition of more wings (such as the West Wing of the building which was built in 1796) and buildings, extra land and further expansion.

Care of the mentally ill was moved to West Philadelphia in 1841 with the construction of the Pennsylvania Hospital for the Insane, later known as The Institute of the Pennsylvania Hospital. Under superintendent Thomas Story Kirkbride, the hospital developed a treatment philosophy that became the standard for care of the insane in the 19th century.

Pennsylvania Hospital gained a reputation as a center of innovation and medical advancement, particularly in the area of maternity. In its early years it was also known for its particularly advanced and humane facilities for mentally ill patients (at a time when mental illness was very poorly understood and patients were often treated very badly).

In 1950 Pennsylvania Hospital was recognized for becoming more highly specialized as it established, in addition to its sophisticated maternity programs, an intensive care unit for neurological patients, a coronary care unit, an orthopaedic institute, a diabetes center, a hospice, specialized units in oncology and urology and broadened surgical programs.

The seal of the hospital, chosen by Franklin and Bond, incorporates the story of the Good Samaritan and the phrase "Take Care of Him and I will repay Thee" is used on it.

In 1997 Pennsylvania Hospital's Board of Managers made the decision to merge with the Penn Health System. The large Health System helps to support the formerly stand-alone hospital with its vast network of resources.

In 2001 Pennsylvania Hospital celebrated its 250th anniversary. It continues to be a center of innovation and excellence in medicine.