In 1945, the State purchased 1,245 acres of land for $62,850 for the future Porterville State Hospital. The site was originally planned for the care and treatment of individuals with epilepsy, but was redesigned as a treatment center for the mentally retarded. Porterville State Hospital opened for service on May 12, 1953, with 200 clients. When Governor Earl Warren dedicated the facility, there was an estimated audience of 3,000 people and most Porterville businesses closed for the afternoon. The total population at the facility reached its peak in 1957 with over 2,600 clients. The facility would later be renamed by the Department of Developmental Services to Porterville Developmental Center to better reflect the purpose of the facility that cared for individuals with developmental disabilities.

In November, 2006, construction began for a 96-bed residential expansion in the Secure Treatment Program. The expansion included six 16-bed living residences, a recreation complex and a new reception building. Construction was completed in October, 2009. 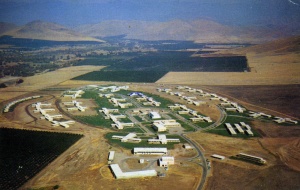