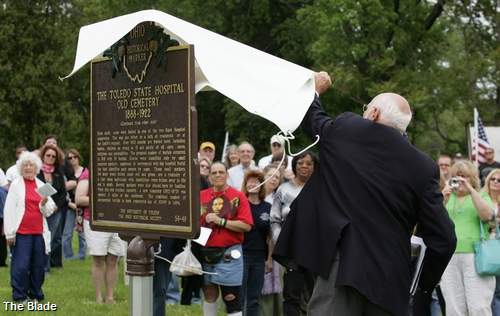 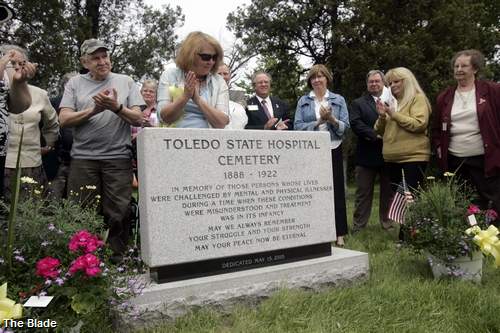 "I feel a sense of finality. We're doing here today what should have been done a long time ago," said Steven Bloir of Mansfield, Ohio, a relative of two Toledo State Hospital patients buried in the cemeteries a century ago.

More than 140 people attended the afternoon dedication of a granite memorial and Ohio Historical Society markers that now announce the entrance to the Toledo State Hospital cemeteries, where 1,994 people were buried in grassy, tree-shaded fields between 1888 and 1973.

Ceremony speakers included Toledo Mayor Mike Bell, who presented a proclamation honoring the deceased and those members of the Toledo State Hospital Cemetery Reclamation Committee who worked to provide them proper recognition.

"We did not treat folks with respect and dignity at the time of their death. I'm very sorry for that," said Terry Smith, chief executive officer of Northwest Ohio Psychiatric Hospital, the descendant of Toledo State Hospital that opened in 1888 as the Toledo Asylum for the Insane.

Patients buried at the sites were typically those whose bodies went unclaimed by relatives after their deaths.

Not only were the hospital's two cemeteries left unmarked, but graves lacked headstones with names and dates. Each burial was instead marked with a small, numbered concrete slab pushed into the ground.

Many of those markers sank well below the surface during the years. The recognition campaign included recent volunteer projects to locate and restore them.

The older of the two cemeteries is off Arlington Avenue near South Detroit Avenue, behind the new Bowsher High School. About 900 were buried there between 1888 and 1922.

When that site filled up, the dead were buried on a second plot on the present-day campus of the University of Toledo Medical Center, formerly known as the Medical College of Ohio, in a field off the East Medical Loop. Those burials date from 1922 to 1973.

Mr. Smith summed up the patients' former predicaments with a quotation taken from a recent local exhibit: "From Institutions to Independence: A History of People with Disabilities in Northwest Ohio."

"While it is fitting that these individuals remain at rest on former state hospital grounds, the fact that their graves are not marked and their burial places are not memorialized is also a commentary on the lives that society forgot," he read.

Mr. Bloir, a middle-school principal, said he recently learned through genealogy research that two of his relatives were buried in the older cemetery.

One was a cousin of his grandmother's from Bryan, who died in 1912; the other was his wife's great-great-grandmother, who died in 1897 and was buried under stone number 130.

"Better late than never to remember our loved ones, family members, who are buried here," Mr. Bloir said.

Troy Meiers of Waterloo, Ind., came to pay tribute to his great-great-grandfather, Nathaniel Arthur Lantz, also of Bryan, who died in the hospital in 1899.

Mr. Meiers said that after some research he learned in the fall that his ancestor lies beneath stone number 214.

"It is very emotional," Mr. Meiers said. "He is finally at rest and he is no longer missing, because for over 100 years he had been missing."

A nurse at the hospital during the early 1950s, Jean Brenner, 82, recalled yesterday how she always wondered what had happened to the patients who died and didn't have family close by.

"I used to walk by here and I never knew there were cemeteries," Mrs. Brenner of South Toledo said.

The dedication ceremony included the playing of Taps by Paul Seabold, a Bowsher High School student, in honor of veterans - some from as far back as the Civil War - buried at the hospital.

And Naki Akrobettoe, a University of Toledo student, read an original poem about the cemeteries and their numeric grave markers.

"I do not believe that a number can read one's favorite color/ or the kind of music that quiets their spirits in distress. And a stone marker covered by leaves/ is equivalent to a blind man that can't foresee the future," her poem said.