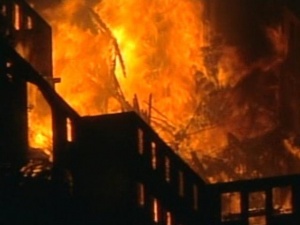 SALEM, Ore. -- Investigators are still seeking the cause of a three-alarm fire that destroyed a vacant building in Salem on Wednesday.

Salem police said the fire at the 40,000-square-foot Fairview Training Center started at about 4 p.m., quickly devoured the building and burned into the night.

The fire, first reported by a pilot passing from above, lit up the Salem sky. When crews arrived, the building was heavily engulfed in flames.

No one was believed to be inside the vacant building at the time of the fire. The water pressure from fire hydrants at the location was too low to effectively knock down the flames and forced crews to truck in their own water.

That led firefighters to take a defensive approach instead of risking lives to save the vacant building, according to Deputy Fire Marshal Jeff Mack.

"At this point, we're protecting other structures around," Mack said Wednesday night. "We didn't want to send other firefighters in and take the chance of getting hurt."

The lack of water and the building's age made the flames nearly impossible to knock down, officials said.

"The old construction, being a dry building, nothing in there, the lack of water supply that we had -- just a combination of things that tend to make the fire grow rapidly," Mack said.

The Fairview Training Center served mentally and physically disabled patients for about 100 years until it closed down in 2000. Neighbors said it has since gained a peculiar reputation.

"It's crazy because as far as I know, that's where all the high school students go and scare each other," said Zoey Carter, who lives nearby. "People say it's haunted."

Security guards were stationed at the gates of the property Thursday morning to prevent anyone from reaching the scene of the fire.

Investigators said the building is a total loss and it's not clear what caused the blaze.