Brattleboro Retreat Hopes To Be Part Of State Hospital Replacement 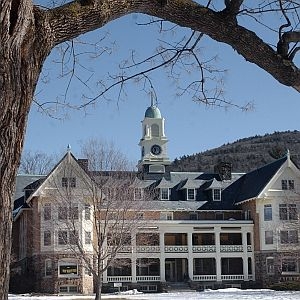 Vermont's oldest psychiatric facility, the Brattleboro Retreat, says it should be part of the solution for the state hospital.

(Keese) Advocates and policy-makers have been working to reinvent the state's mental health care system since 2003. That's when the Vermont State Hospital in Waterbury first lost its certification.

(Hartman) "Part of the original concept is that we needed to try to create more community based beds to have patients who might currently be in the hospital live in settings that were a little bit closer to a community level of care."

Hartman says it serves people who don't need to be hospitalized, but who need more help than they can get by simply living in the community.

A similar, six-bed program recently started at the Brattleboro Retreat, in partnership with a local mental health agency.

Peter Albert is director of government relations at the Brattleboro Retreat.

(Albert) "It's a residential program, so it's not locked. If you go there and you meet the residents who are there and you talk to them, you wonder why they were sitting at the state hospital for so long and you begin to appreciate how important it is that we close that place and get people out of there."

(Keese) Albert says the Retreat wants to be one of the institutions that can accept mental health patients who do need to be hospitalized.

Officials estimate 45 new hospital beds will be needed. The Retreat and four other hospitals made proposals for providing a portion of that need.

But a report by the Department of Mental Health earlier this year recommended that some of the beds be created at the Rutland Regional Medical Center. Others would built on land donated by the Veterans Affairs hospital in White River Junction, and the Dartmouth Medical School would provide the psychiatric care.

But everything is still in flux because of lack of money, and creating new beds at Brattleboro hasn't been ruled out.