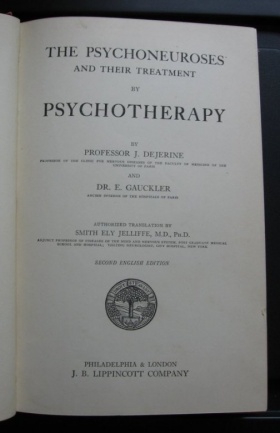 Neurosis was a class of functional psychiatric disorders involving distress, with neither monothematic delusions or hallucinations. While it was a DSM diagnosis it was also known as psycho-neurosis or neurotic disorder, and thus those suffering from it are said to be neurotic. The term essentially describes an ongoing cognitive or affective civil war. While being removed from the DSM in 1980, it still remains in use in psychoanalytical circles. The disorders once classified as neuroses are now considered anxiety disorders. These changes to the DSM have been controversial. DSM-II defines Neuroses as such: "Anxiety is the chief characteristic of the neuroses. It may be felt and expressed directly, or it may be controlled unconsciously and automatically by conversion, displacement and various other psychological mechanisms. Generally, these mechanisms produce symptoms experienced as subjective distress from which the patient desires relief."

The term neurosis was coined by the Scottish doctor William Cullen, in 1769 to refer to "disorders of sense and motion" caused by a "general affection of the nervous system". For him, it described various nervous disorders and symptoms that could not be explained by the physical condition of the mind or body. It derives from the Greek word "νεῦρον" (neuro) with the suffix -osis, meaning an abnormal condition. The term was however most influentially defined by Carl Jung and Sigmund Freud over a century later through its employment in psychoanalysis. It has continued to be used in contemporary theoretical writing in psychology and philosophy, but not clinically.

These are the classifications of Neuroses as they were defined by the American Psychiatric Association in 1968 through the Diagnosistic and Statistical Manual, Second Edition. They have since been replaced by a number of other conditions that attempt to categorize behavior, most noteably the division of Anxiety Disorders.

War Neurosis as a term[edit]

War Neurosis, now known as Combat stress reaction (CSR), was a term used within the military to describe acute recurring behavioral disorganization as a direct result of the trauma of war. Commonly, it is known as "combat fatigue", and it has some overlap with the diagnosis of acute stress reaction. Historically, other terms have been employed as well, such as: shell shock. Civilians psychiatrist used terms like Railroad Spine or Convalescence to describe similar symptoms. War Neurosis was an acute reaction including a range of behaviors resulting from the stress of battle which decrease the combatant's fighting efficiency. The most common symptoms were fatigue, slower reaction times, indecision, disconnection from one's surroundings, and inability to prioritize.

In World War I, shell shock was considered a psychiatric illness resulting from injury to the nerves during combat. The horrors of trench warfare meant that about 10% of the fighting soldiers were killed, and the total proportion of troops who became casualties was 56%. Whether a shell-shock sufferer was considered "wounded" or "sick" depended on the circumstances and the clinical provider. This was believed to be the result of the mechanization of warfare.

According to Freud's psychoanalytic theory, neuroses may be rooted in ego defense mechanisms, but the two concepts are not synonymous. Ego Defense mechanisms are the means of developing, and maintaining, a consistent sense of self-hood, while only those thoughts and behavior patterns that produce difficulties in living should be termed "neuroses". Neurosis is classified under this schema as an internal conflict between the conscious mind and unconscious desires. This is the view upheld as being orthodox within the psychoanalytic community, however, more contemporary sources might refer to it as 'cognitive dissidence'.

Carl Jung's theory of neurosis is based on the former, that a self-regulating psyche composed of tensions between opposing attitudes of the ego and the unconscious were at work. A neurosis is a significant unresolved tension between these contending attitudes. Each neurosis is unique, and different things work in different cases, so no single psycho-therapeutic method can be arbitrarily applied. Nevertheless, there is a set of cases that Jung especially addressed. Although adjusted well enough to everyday life, the individual has lost a fulfilling sense of meaning and purpose, and has no living religious belief to which to turn. There seems to be no readily apparent way to set matters right. In these cases, Jung turned to ongoing symbolic communication from the unconscious in the form of dreams.

Resolution of the tension causing this type of neurosis involves a careful constructive study of the individual's fantasies. The seriousness with which the individual must take the mythological aspects of the fantasies may compare with the regard that devoted believers have toward their religion. Only a belief founded on direct experience with this process is sufficient to oppose, balance, and otherwise adjust the attitude of the ego.

Neurosis following its removal from the DSM[edit]

Most of the sub-types of Neuroses remain in the DSM as formal psychiatric conditions; however, they have been classified differently because of psychiatry's rejection of psychoanalytical theories. For example, Hysterical Neurosis remains as a psychiatric diagnosis in the DSM, albeit with a separate name. The new title, Conversion Disorder, is a condition in which a person has blindness, paralysis, or other nervous system symptoms that cannot be explained exclusively by medical evaluation. Conversion Disorder symptoms may occur because of an internal psychological conflict.