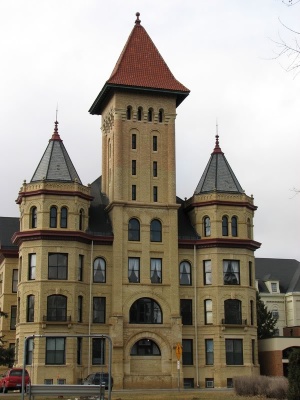 The Fergus Falls town council is considering plans to demolish most of the historically listed Kirkbride building.

The state sold the Kirkbride and grounds to the city of Fergus Falls in 2007, and two years later, the facility closed. It has remained vacant ever since. Between 2002 and 2006, the Legislature approved $7 million in bond funds to dispose of the Kirkbride or invest in its infrastructure. The current deadline to use the funds expires in December 2014 but could be extended with legislative action. City officials claim it takes about 18 months to initiate the complicated demolition process. About $5 million of the original funds remains, since much of the facility's asbestos already has been removed. On three occasions since 2000, the Preservation Alliance of Minnesota has put the Kirkbride on its annual "Ten Most-Endangered Historic Places List," noting that the Fergus Falls Kirkbride facility is one of the few of its kind left intact in the Midwest. 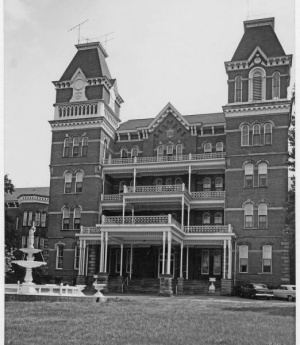 The Athens Historical Society is trying to convince the school not to tear down any more historic structures at The Ridges. Please support them and send a message to the school's president and board of trustees either by signing the online petition, or by writing/calling the president and board directly. 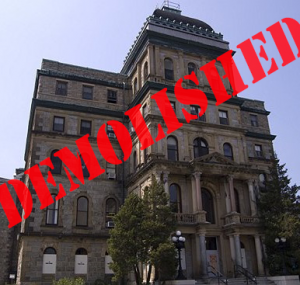 On July 16, 2008, after countless unexplained delays, patients were finally moved into the new hospital building. Administration and other departments followed in suit. Today almost all hospital services have relocated to the brand new complex. Morris County has installed skating rinks and a ball field on its 300 acre share, and plans to incorporate a dog park where the Curry Complex once stood, as well as an athletic complex for disabled athletes. The Central Avenue Complex is planned to become a mall for nonprofit charitable agencies. The state of New Jersey began looking at options for what to do with the rest of the surplus Greystone land and buildings. A group called Preserve Greystone was formed in hopes to work with the state and government to preserve both open space and the remaining buildings from the hospital.

In April 2013 the state announced that redevelopment was 'not financially feasible' and would cost less money to demolish. On August 18, 2013 the state announced it planned to tear down the historic main building at the old Greystone hospital at a cost of 50 million tax payer dollars, despite having received several viable redevelopment proposals. On August 30th Preserve Greystone filed suit against the NJ Treasury Department for release of all correspondence related to the redevelopment proposals.

UPDATE: In April 2015 demolition began on Greystone's southern female wing, the demolition continued with Greystone's northern male wing in July 2015, the building's center main buildings including the chapel, and amusement hall were demolished in September 2015, and finally with the administration building itself in October 2015. 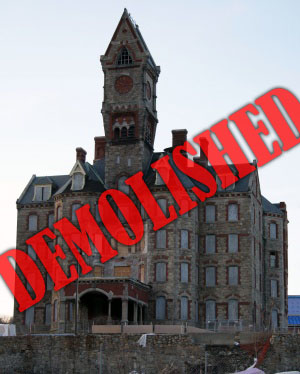 The last remaining sections of the Worcester State Hospital kirkbride are in danger of demolition!

The fate of the historic Clock Tower is precarious because of a ruling by the National Park Service that the structure does not quality for Historic Tax Credits. A meeting was held at Preservation Worcester on July 27, 2011 with Carole Cornelison, Commissioner of the Division of Capital Asset Management (DCAM), eight additional DCAM employees, Barbara Leadholm, Commissioner of the Department of Mental Health (DMH), an additional DMH employee, Brandee Laughlin (Massachusetts Historical Commission), Drew Leff (GLC Development Resources). Michele Barker (Preservation Massachusetts) and 7 Preservation Worcester affiliated representatives. At that meeting, updates were given on the Clock Tower and the new psychiatric hospital. We were informed that because of the condition of the Clock Tower and the expenses associated with redevelopment or stabilization, DCAM plans to demolish the Clock Tower prior to the opening of the new psychiatric hospital, scheduled to open in 2012. More..
UPDATE: As of January 2013 demolition of the administration section of the Kirkbride has begun. The clock was dismantled, presumably to be reassembled later on.

JOIN THE CONVERSATION IN THE FORUMS!