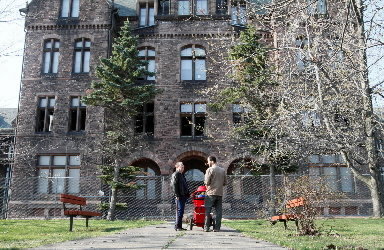 
A two-alarm fire caused an estimated $200,000 in damage early Saturday to the main “towers” building at the landmark H. H. Richardson Complex on Forest Avenue.

Firefighters got a call at 3:15 a.m. of a fire in the vacant building.

The blaze was confined to the second floor, where, in the aftermath, more than a dozen windows were open to the elements.

The damage threatened to complicate ongoing rehabilitation efforts at the former Buffalo State Asylum for the Insane, notable for its two soaring Gothic towers and considered one of Buffalo’s finest architectural masterpieces. The complex, which also includes grounds designed by landscape architect Frederick Law Olmsted, was registered as a National Historic Landmark in 1986.

The Richardson Center Corp., a nonprofit organization charged with the complex’s rehabilitation and reuse, issued a statement, saying:

“This morning’s fire at the Richardson Olmsted Complex was unfortunate. We are saddened about the building damage but are glad no one was hurt. Work to seal up the building will take place, and we will continue to advance the first phase of redevelopment.”

Although the fire appeared intentionally set, the cause remained under investigation.

“Since it’s vacant, it’s very suspicious. We did find a point of entry where somebody probably broke in,” Division Fire Chief Jack Hess said.

While signs pointed to arson, fire marshals had yet to make a determination, he added.

The fire appeared to have originated in some papers on the floor. It worked its way into walls and the ceiling, charring studs and floor joists and damaging some exterior masonry, but caused no major structural problems.

Upon arrival, firefighters encountered heavy smoke and intense flames shooting from a window, and 60 firefighters remained on the scene for nearly two hours.

“I’m told there’s no structural damage,” Hoyt said. “The bigger concern is how do we prevent it from happening again.”

Trespassers inside the mammoth complex have been a problem for years, he added.

An increased security presence and fencing around the buildings in recent years have helped, but the sheer size of the complex makes it difficult to keep out all trespassers, he said.

“All of the entrances are pretty well sealed, but it doesn’t stop someone with a crowbar or whatever from getting in,” he said. “It’s dark. The entire grounds there are 90 acres. It’s hundreds of thousands of square feet of building, so it’s difficult to make it entirely secure while it’s abandoned.”

In 2006, then-Gov. George E. Pataki set aside $100 million to rehabilitate the complex, most of which has been dormant since 1974.

About a quarter of that money has been used for other Buffalo projects, including the Burchfield Penney Art Center and the Darwin D. Martin House.

The Richardson Center Corp.—with a board appointed by Pataki — now is responsible for stabilizing the buildings and charting a course for their future reuse.

An architectural and visitors center has been envisioned for the site’s signature twin towers, as well as classroom space for Buffalo State College.

In 2007, a national panel of experts also recommended a hotel, housing and retail space in and around the buildings.

The former asylum is the largest and first major work of Henry Hobson Richardson, considered one of the nation’s greatest architects. Its design launched the style known as Richardsonian Romanesque.

Construction on the buildings began in 1870 and took two decades to complete.