The Arkansas State Hospital is the only state-owned and -operated facility for the treatment of mental illness in Arkansas. The structure, function, and name of this facility have changed with the development of new technology and more progressive views for treating individuals suffering from mental illness, epilepsy, birth defects, learning disabilities, and the effects of old age. 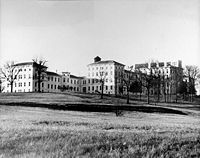 In 1873, $50,000 was appropriated by the state legislature for the purchase and construction of a facility for the care and treatment of the mentally ill in Arkansas. The purchase of a plot of land west of Little Rock (Pulaski County) took most of the original appropriation. The site of the original hospital is where the present day offices of the Arkansas Game and Fish Commission are which is just north of Markham Avenue and near I-430. The Brooks-Baxter War of 1872 and political wrangling about the planned location of the facility delayed any further action until 1881.

In 1881, the legislature levied a one-mill tax on all property in the state for two years and created an appropriation of $150,000 for the construction, outfitting, and operation of the asylum.

The asylum opened officially on March 1, 1883, with Dr. Chastaine Caldwell Forbes as superintendent. The first patient had actually been admitted by legislative order a few days earlier. Over the next few decades, a pattern of overcrowding and expansion emerged. As the available space was filled, the legislature was convinced to provide for the construction of additional facilities. By 1915, there were twelve buildings housing patients at the Little Rock site. In the 1930s, a hospital farm was established at Baucum (Pulaski County), where some of the more physically able patients were employed in the operation of a dairy farm. There were about 100 inmates to start with at the farm. By 1936, the need for further expansion prompted the opening of the Benton Farm Colony, as it was then called. It was planned to hold about 2,000 patients. With the opening of the Benton Unit of the State Hospital (BUSH), a geographical plan for admissions was made. The Arkansas River was the divider, those from north of the river were admitted to the hospital in Little Rock while those from south of the river were admitted to the Benton unit In 1957, due to changes in what was thought appropriate in the care of the inmates, the legislature ordered the cessation of all farm operations.

After almost eighty years, many of the original buildings were becoming dilapidated, and there were calls to replace the structures. In 1960, $6 million was appropriated for the renewal of the Little Rock facilities, and then in 1964, a federal grant of $291,950 was acquired for the updating of the Benton Unit. The Little Rock facility, in use as part of the Division of Behavioral Health Services, was replaced in 2008 with a 130-bed, 152,000-square-foot building adjacent to the campus of the University of Arkansas for Medical Sciences (UAMS). The old facility was replaced after mental health advocates complained about it being inadequate for the proper treatment of the mentally ill although the Forensics Unit remains at the site. UAMS bought the land and has since built a dorm on the site. The Little Rock Community Mental Health Center at one time was part of the State Hospital and was known then as The Greater Little Rock Ommunity Mental Health Center before becoming private, not for profit in 1993. Pulaski County Circuit Court has a courtroom on the grounds by LRCMHC and the Forensics Unit which is used for all civil committment hearings and 911 proceedings. In the late 1960's the state opened George W. Jackson Community Mental Health Center in Jonesboro which provided hosptization for patients in northeast area of the state as well as outpatient care for the region. In 1993 Midsouth Health Systems was incorporated and chartered by the state to take over as the CMHC for George W Jackson.

Many great Arkansans contributed to the advancement of this institution. The Honorable Hiram Marion McVeigh? drafted the original legislation that created the Arkansas Insane Asylum. Chastaine Forbes was the first superintendent, and Dr. Philo Hooper served as an original board member from 1881 to 1893 and as superintendent from 1896 to 1901. His own wife later became an inmate of the hospital. Dr. Elizabeth Fletcher became the first female physician at the hospital in 1936 and spearheaded much advancement in the care of mentally disabled children.

For many years, this was the only facility in Arkansas for dealing with people who, in modern times, would be sent to nursing homes, special schools, and rehab centers. Advancements in the medical community’s knowledge about vaccinations, prenatal care, and pharmaceutical treatments have caused the Arkansas State Hospital to change and develop. The hospital now maintains more of a focus on the treatment of the mentally ill, with the plan to get them back into society. Instead of a warehouse for people who are mentally unable to care for themselves, the citizens of Arkansas have state-of-the-art facilities to treat and possibly cure a wide range of mental illness. [1]