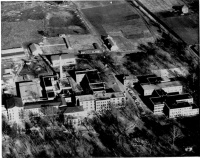 There is a cemetery at the rear of the property that contains approx. 4,000 to 6,000 sets of remains of former patients buried on the property between 1824 & 1956. This cemetery has been in place since 1984 after the original cemetery had been moved twice. An unknown number graves exist throughout the hospital containing as may as 4,000 additional graves.