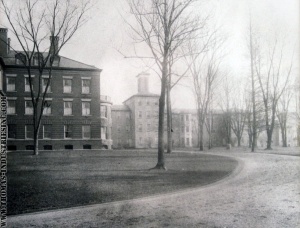 Harrisburg State Hospital is one of the oldest hospitals in the Commonwealth of Pennsylvania. When it was founded it had only one building, the Dorothea Dix Cottage. It served 12 surrounding counties, which had a population of 926,452 in an area of 8,000 square miles. The facility provided over 150 years of service to Pennsylvania's mentally ill, until January of 2006, when it closed.

The Harrisburg State Hospital was created as the Pennsylvania State Lunatic Hospital and Union Asylum for the Insane in 1845 to provide care for mentally ill persons throughout the Commonwealth of Pennsylvania. The hospital was the result of the successful lobbying efforts of 19th century social reformer, Dorothea Dix. A nine member board of trustees was empowered to appoint a superintendent, purchase land, and construct facilities near Harrisburg. This board of trustees received no compensation for their work. In 1848, the name of the hospital was changed to the Pennsylvania State Lunatic Hospital when $50,000 was appropriated to begin construction. Patients from all parts of the state would be accepted at the hospital, at the expense of the counties that they belonged; or, if able they would pay for themselves at a cost of $2.50 per week. This cost included board and medical attention.

Originally the hospital only had one building which housed the administration, staff, and patients. Built in 1851, the Main Building was designed following the "Kirkbride Plan" which was a very popular building style during the late 19th century. The original capacity of the building was 250 patients, but was later expanded with the removal of dinning rooms and the addition of the North and South Branch Buildings. For more information on the Kirkbride Plan Main Building click here. A 130 acre farm was located adjacent to the hospital and provided work therapy for the patients and also enabled the hospital to be self supporting, by growing its own food, and raising its own livestock. When the first patient was admitted on October 6, 1851, every poor district was charged a $2.00 weekly maintenance fee for the care of each indigent patient. The boarding charges for private patients were scheduled to vary between $3.00 and $10.00 based upon ability to pay. In 1869 the Board of Public Charities was created to inspect all public and voluntary charitable institutions in the Commonwealth and to report to the legislature with recommendations concerning their operation. For four decades this unpaid Board and its small staff had no authority to correct the conditions it found with in state institutions. Nonetheless, by persuasion and publicity they were able to improve the quality of care in public institutions. A major objective was the removal of the insane from almshouses to the Pennsylvania State Lunatic Hospital and other state hospitals. A Committee on Lunacy was created within the Board of Public charities in 1883 to oversee the operations of these mental institutions.

The early 20th century was a time of great change for Harrisburg State Hospital. The Main Building had become old and was in need of replacement. Between the years 1893 and 1912 the hospital was rebuilt following the "Cottage Plan", which became popular at the beginning of the 20th century. At its peak the hospital consumed over 1,000 acres (4.0 km²) and included more than 70 buildings. Designed and constructed by Pennsylvania architects Addison Hutton and John Dempwolf the campus and buildings were meant to represent an Italianate window. The buildings on the male and female sides of the campus mirrored each other until the addition of new buildings in the 1930s.

In 1921 the name of the hospital was changed to the Harrisburg State Hospital. Also that year, the Board of Public Charities was abolished and the Department of Public Welfare was created to administer all state hospitals. With the completion of the new "Cottage Plan" buildings, the hospital had grown considerably larger. Its patient capacity was 2,019, but at one time it held as many as 2,441 with 437 on parole. The hospital was self-sufficient with its own farm, power plant, and stores; it became known as the "City on the Hill". During war time there was a 50% shortage of attendants, at the lowest level of employment there were as few as one nurse to 166 patients. In June of 1945 only 26 of the 92 authorized positions on the male side were filled. The manpower shortage resulted in widespread curtailment of services to both the public and patients.

Up until 1955 certain administrative responsibilities, such as the selection of the hospital Superintendent and the enactment of rules and regulations governing the hospital were vested in the Board of Trustees of the Harrisburg State Hospital. In 1955 an amendment to the Administrative Code authorized the Department of Public Welfare to assume administrative responsibilities for the Harrisburg State Hospital, relegating its Board of Trustees to specific advisory duties. This act also provided for the appointment of a Commissioner of Mental Health in the Department of Public Welfare who assumed overall responsibility for Pennsylvania's mental health program.

Like other institutions Harrisburg State Hospital’s patient population began to fall in the late 20th century. This was due to new medicines being developed and finally deinstitutionalization. The hospital was finally closed on January 27, 2006. Today (2008) the hospital sits on a two hundred acre campus with stately buildings in a country setting, in Dauphin County, with a majority of its campus in Susquehanna Township. There are over fifty buildings still located on the campus. The former hospital facility now provides office space for many state agencies.

Girl, Interrupted
In 1999 Harrisburg State Hospital was used for the hospital setting in the film, Girl, Interrupted. The majority of the film was shot in the Male Convalescent Building and the Administration Building. Other various locations in Harrisburg, Pennsylvania were also used. The Harrisburg State Hospital settings were meant to resemble those of the grounds of McLean Hospital in Massachusetts. The hospital was still an active Pennsylvania state hospital during the filming of the movie. Some of the props created for the movie still remain at the hospital today, like the "Administration" signs that still hang in the carport in front to the Administration Building.

Another Harvest Moon
In 2008 Harrisburg State Hospital was used as the setting for a movie called Another Harvest Moon. The movie was filmed in the Hilltop Building. The story is set in a retirement home where the main character has survived a stroke and is reconciling living in a new way than he's accustomed to living. (As of January 2011 this movie has not been released)

Ghost Lab
In May of 2010 the TV Series Ghost Lab filmed an episode at the hospital. The episode which was name "The Morgue" aired on the Discovery Channel on December 11, 2010.

City on the Hill
A book written by Ernest Morrison detailing the history of the hospital. The book is currently out of print, copies of the book occasionally appear on eBay.

The Physician, the Philanthropist, and the Politician
A book written by Ernest Morrison about the Pennsylvania state hospital system in general. The book has a section on HSH as well a a few photos. The book is currently out of print, copies of the book occasionally appear on eBay.

City on the Hill: A website dedicated to the Harrisburg State Hospital.