Experts in the psychological field would never have predicted we would medicate people rather than have them in controlled environments. The Norwich State Hospital opened its doors in 1904 to the insane with ninety-five patients in one building on over 100 acres.

One of the hospital’s first superintendents believed that mechanical restraint of patients was preferable to medication and believed in hydrotherapy as a treatment measure. The Board of the hospital quickly realized the population was exceeding what was safe. In 1905, two patient buildings were built with a third opening in 1907.

Thirteen buildings were erected for patients during the next eight years and in 1913 with a population of 998, an administration building, three cottages for physicians, a carpenter and maintenance shop, a main kitchen, garage, laboratory, staff house, and an employees’ club house had been erected and the inebriate farm and the Colony had been established. 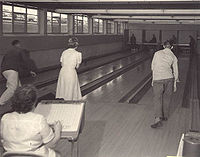 Seven new buildings were built between 1920 and 1930 and another building was purchased for patients’ use. In 1929, the hospital peaked with 1,115 patients while in 1930 the average daily census reached 2,422. At this point, in addition to new patient facilities, two more cottages were erected for physicians, a female employees’ home, a paint shop, a greenhouse, a superintendent’s residence, and two garages were built.

Tubercular patients were housed between 1931 and 1939 in one patient building called Seymour which led to the closure of the “Pines” buildings. Two more cottages for physicians, male employees’ home, and a nurse’s home were also built. World War II had impact on the staff at Norwich State Hospital with the nursing staff being reduced by more than 57 percent, a loss of 30 nurses, and 146 aides. Nursing employees for the first time only made up 44 percent of the total staff.

Non-nursing staff increased by more than 32 percent while the daily census fluctuated slightly and increased to 2,574 by 1945. In 1941, affiliations for occupational therapy students lead to the increase of the number of occupational therapists to 28 by 1945. The average daily census climbed to 2,799 by the end of 1950 while many new buildings were added to the complex hospital between 1950 and 1962.

During this era, each time a new patient building was constructed, an old building was closed. It is important to realize all the buildings currently standing at Norwich State Hospital were never fully occupied at the same time and many of them left abandoned even before the hospital officially closed. In 1956, the Lodge building was completed which resulted in patients from Butler, Cutter, and Dix were transferred and these buildings no longer used for patients.

The Kettle Building that which is seen by those traveling from Foxwoods to Mohegan Sun using Route 2A, was built in 1959. Also during that year, a powerhouse, laundry, pump house, fifteen cottages for physicians, an incinerator, an Occupational Therapy Building, and employees’ building, a chapel, and a research and clinical laboratory building were built. At this point, the hospital sprawled to over 900 acres. 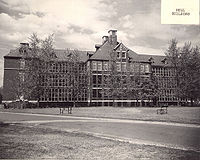 In 1966, Dr. Martin was appointed Superintendent and his mission was to direct quality care for patients and he met his mission by creating diversified programs. Martin wanted to increase freedom for patients and supported and encouraged a democratic administration and meeting needs of patients and staff. The hospital slowly decreased in population at the end of 1972 with only seven of the original buildings and one former employees’ resident in use for an average of 1,148 patients. The total staff decreased to 1,248 at this point.

The population decreases occurred as a result of increasing admissions and discharges, shorter period of hospitalization, the development of special programs for alcohol and drug dependent and geriatric patients and increasing emphasis on crisis intervention. Administration operations moved to a section of the Kettle building with a small monumental like “Norwich Hospital” sign with a blue cross sitting on the grassy field. The frame of the sign still sits there today.

In the late 1990’s the hospital closed and housed only the Southeastern Connecticut Mental Health Authority in the Salmon building. Later this closed down when those offices moved to the Uncas on Thames Hospital Campus.

An elderly housing complex which existed in the late 1980’s when the hospital slowly downsized moved into the old male employee building near the Pond View building on the east side of Route 12. It is important to note that Norwich Hospital was the first state psychiatric hospital to initiate a referral program to Public Health Nursing Agencies for services to patients. [1]