As early as 1862 Governor Addison Gibbs recommended to the Oregon Legislature the establishment in Salem of an asylum to provide for the care and medical treatment of "insane and idiotic persons". Prior to the passage of any act dealing with the insane, each county had dealt with such unfortunate citizens on an individual basis. A document in the Oregon Archives offers an instance of this bidding procedure: dated August 6, 1845, William P. Dougherty of Oregon City awarded a contract for "Boarding, clothing, and keeping" Eli Smith, "a lunatic," to Andrew Hembrie for $1.00 per day. Hembrie was under a $600 bond to fulfill the contract. Similar contracts could be found in each of the counties, usually under "Pauper Accounts."

By 1862, Dr. J. C. Hawthorne had opened his Portland Institute for the Insane. Marion County, along with most of the counties then in existence, contracted with Dr. Hawthorne to care for their citizens "of unsound mind." At county expense, these unfortunates were shipped to Portland.

Funds were allocated in the Fall of 1880 for the Oregon State Insane Asylum; the site selected was north of the state prison on a slight rise just east of Salem, its present location. Groundbreaking took place in May 1881 with much of the labor force and brick building material coming from the penitentiary.

Completed in the summer of 1883, the main building of the hospital ("J" building) is a familiar sight to anyone traveling on Center Street east of downtown Salem. The street leading to the hospital was originally designated Asylum Avenue. To oversee the operations at the facility, Dr. Horace Carpenter, a local physician, was hired as the first Superintendent of the new facility, and the staff was engaged to serve the 412 patients the hospital could accommodate. In the Morning Oregonian appeared an account of the transfer of 261 male patients from Portland's Hawthorne Asylum to their new home in Salem. The reporter characterized these patients as "representing almost every known stage or degree of insanity, idiocy, imbecility or helplessness". (Actually, records indicate that 268 patients made the trip to Salem that day.) On October 24th, 1883, 102 female patients were transferred to Salem, including three girls, ages six to nine.

For three decades the facility operated as the Oregon State Insane Asylum. In 1913 the name change to Oregon State Hospital occurred. In this year also a crematory was put into use on the hospital grounds and all burials in the Asylum Cemetery were disinterred and cremated. Following the enactment of S. B. 109, deaths at "any eleemosynary, penal, or corrective institution of the State of Oregon located at or near to the city of Salem," if unclaimed by a friend or relatives, would be subject to cremation. Their ashes now rest in the Memorial Circle on the western limits of the hospital grounds, "In Memory of Those Who Have Passed Away at the Oregon State Hospital." The incinerator, called "Steiner's Chimney," (for then-superintendent Dr. Lee Steiner who had it built in 1910) can still be seen, though now the structure enclosing it houses the power plant.

The main hospital building (now called the "J" building) was originally designed according to Kirkbride’s specifications, but when it came time to add on additional wards, real estate issues prevented the wings from being extended in the normal fashion. Instead, they were extended back at a right angle to the original building’s main axis. An extension of the hospital’s north wing ("Cascade Hall" or "J" building) in 1899 and the addition of seven separate buildings, including the familiar 1912 "Dome Building" where the movie One Flew Over the Cuckoo's Nest was filmed, in succeeding years reflect the growing realization that the mental health of Oregonians is a continuing concern. 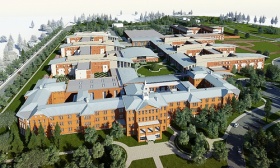 There will be a new 620-bed mental health recovery center built on the existing site on Center Street NE. Construction is set to begin in the Spring of 2009 and finish in 2011. A 360-bed facility is proposed for Junction City. The cost of both new treatment centers is estimated to be 458 million dollars.

Salem’s facility is to serve the northwestern end of the State. It appears the area south of Center street where the historic J-building is located has been chosen for the new facility. A due diligence report indicates there are no “show stoppers” for that area. While nothing official has been said about tearing down the J-Building?, there is mention in the September OSH Replacement Project FAQ of the decrepit J-building and of “replacing a dilapidated hospital” and of the process for removal of lead-based paint and asbestos abatement (which would happen if the J-building were to be torn down.)

There has been talk of the structure not surviving an earthquake. Certainly, its use as a hospital is risky. But other historic brick buildings have been successfully retrofitted recently. One example is Waller Hall on the Willamette University campus. There have been 3 significant earthquakes in the greater Portland area. On July 24, 2008, Salem’s Historic Landmarks Commission will receive the request for demolition of portions of The J Building and other structures on the Oregon State Hospital campus. Some preservationists reluctantly approve of the proposed demolition plan. The demolition of these structures is necessary to create space for the new Oregon State Hospital. Preservationists succeeded in saving the oldest part of The J Building, dating from 1883, along with several of the historic homes and other important structures on the campus.

The part of The J Building slated to be preserved includes the original Kirkbride architectural philosophy. The preservation plans also call for recreating the original entry to the hospital, including the historic fountain, recently found in remarkably good condition in a hospital storage room. A new museum focusing on the history of mental health care in Oregon is also planned for the preserved building.

Demolition of any historic building is a sad event. However, it is necessary to sometimes say goodbye to parts of our past to make way for newer facilities, particularly when those new facilities will be designed to provide better care for our most vulnerable citizens. The State’s current plans graciously provide for the preservation of a significant part of the Kirkbride-inspired J Building along with honoring it further by designating part of it as a museum.

In addition, the Oregon Department of Human Services will open portions of the J Building to a one-day public tour prior to demolition. This will provide people with an opportunity to say goodbye to a building that has long been a part of Salem’s history. It will also be an opportunity to view a model of the planned new hospital. The tentative date for the open house tour is September 10, 2008.[1][2][3][4]

A 2,500 square foot, volunteer-run museum is scheduled to open in 2012. Museum website