In 1900, Louisville, Kentucky had the highest tuberculosis death rate in the country. This was due to the fact Louisville is such a low valley area and before development, was basically all swampland and perfect breeding ground for the Tuberculosis bacteria. As with many other towns and cities across the country, hospitals were needed to care for the sick. In 1910, a wooden, two-story hospital with 40 beds opened on one of the highest elevated hills in southern Jefferson County to try and contain this ravaging disease.

Officials soon found that this small hospital was simply too small, as they were soon housing more than 130 cases of tuberculosis. Louisville needed a much larger facility and money began to be raised for its construction. Land was donated and $11 million was used to started construction on the new hospital in 1924.

The hospital, known as Waverly Hills, was opened in 1926 and was considered to be the most advanced tuberculosis hospital in the country. If a patient had any chance of surviving the disease, Waverly Hills was the place to come for treatment. Of course, treatment in those days was primitive at best, meaning that many simply came here to die. In those days, it was believed that the best cure for tuberculosis was plenty of nutritional food, plenty of rest and plenty of fresh air. Many patients came to Waverly and were actually cured and became well enough to once again enter society. For those not as fortunate, Waverly was the last place they ever saw. Records have been lost, but it is estimated that tens of thousands died at Waverly. At the height of the tuberculosis epidemic, it was reported that one patient an hour died. 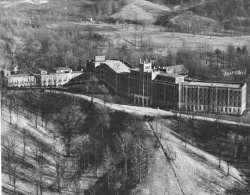 A historical aerial photograph of the hospital.

In 1961, Waverly Hills Sanatorium was closed because there was no longer a need for a tuberculosis facility. The buildings were reopened in 1962 as Woodhaven Geriatrics Sanitarium.

There have been many tales of patient mistreatment and unusual experiments that have filtered down from the hill over the years. Some have been proven false, while others unfortunately have turned out to be true. Electroshock therapy was widely used, although it was considered to be a very effective treatment in those days. Even today, it has been used with great results but now, as it was then, tragic losses sometimes occurred. During the 1960’s and 1970’s, a time of budget cuts for facilities of this type, there were many well documented cases of horrible conditions and unusual treatments at mental institutions all across the country. Apparently Woodhaven was no different because the state of Kentucky closed it down in 1982 due to patient abuse. The buildings, contents and land were auctioned off and the doors were locked for good.

The building and land changed hands several times over the next 18 years. The second owner of the property wanted to tear all the buildings down to construct the world’s largest statue of Jesus Christ. He succeeded in demolishing all of the buildings except for the main hospital and was only stopped by an injunction because the building is on the National Historic Register’s “endangered” list. He then decided that if he couldn't’t legally tear it down then he would do everything in his power to get it condemned. He let vandals come into the building and tear it up. After breaking windows, porcelain sinks, toilets and doors, they began spraying graffiti on every available wall. The owner then dug around the foundation, in some places as deep as 30 feet, to try and make the foundation crack. If this happened, then he believed he could get the building condemned and would be able to legally tear it down. Fortunately, the structure refused to give way and his efforts failed. The area where his extensive digging took place can still currently be seen.

In 2001 Waverly Hills was sold to current owners Tina and Charlie Mattingly. Charlie's father, who died in 2005, worked as an orderly at Waverly Hills for approximately four years. The Mattinglys currently hold tours of Waverly Hills and convert the building into a haunted house attraction each Halloween. There are also historical tours, ghost tours, as well as overnight investigations available for a fee. Proceeds go toward saving the building and the restoration of the property.

Despite the claims of over 60,000 patient deaths from TB at Waverly Hills throughout it's history, research has shown that the number is more likely closer to 10% (6,000) of that. Extensive research of the number of deaths can be found | HERE

The following twenty minute 1936 video entitled "On The Front Lines" was about the major scourge of the time, tuberculosis, and features Waverly Hills Sanitarium for most of its hospital scenes.