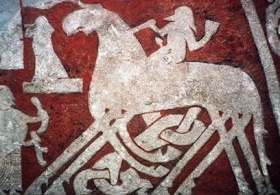 Woodness, sometimes rendered in early Anglo-Saxon sources as 'Wodnes', 'Wodeness' or 'Wodness', is an archaic terms meaning Insanity, or generalized psychotic condition. Its etiology is generally unclear when it appears during the dark ages. When authors of the late middle ages allude to it, they specify it as a condition where the intelligible mind is separated from the vegetative soul. This appeared to be unaffiliated with either Platonic or Aristotelian conceptions of the anima/animus, although it is likely influenced by both. In some of the earliest sources its meaning is more flexible, meaning a 'fury', 'savagery' or an 'uncontrolable rage'. This state of rage is a supernatural condition brought on by divine or semi-divine being. It is not altogether clear, butbrom its references in early Anglo-Saxon translations of the Greek New Testament it appears to suggest that the individual is under the suggestion or possession of a spirit/daemon (ie. Dis Godspel scael on done oderne Wodnes daeg ofer Pentecosten), that is inspired by an unknown spirit. This is consistent with the image of mental illness common prior to the rise of Greek medicine, and the commonality of the writings of Hippocrates and Galen.

This notion of 'Woodness' was originally deemed a positive attribution of an individual, and was formerly associated with Germanic shamanship. What is sometimes common in Germanic and Anglo-Saxon circles is the association between: insantiy, inspiration and the pagan god Woden. Woden is associated with an encompassing anger that is a mixed of poetic intent and individual fury, that is to say, a recurring manic ecstasy. The 11th century German chronicler, Adam of Bremen, detailed the religious practices of Scandinavian pagans, described "Wodan, id est furor" (Woden, that is, the furious). This practices apparent was common place for many century and in the origin of the Old English term Woodness/Wodnes. It is also likely that, with the rise of Christianity in the Anglo-Saxon kingdoms, this inspiration of the god Woden was perceived as being increasingly negative, and associated with an unorthodox view of human consciousness.

This mental condition is reflected frequently in popular English literature as late as Geoffrey Chaucer's work 'Canterbury Tales', in the 14th century. Lines alluding to Woodness as mental illness include, "What sholde he studie and make hymselven wood", "armed, and looked grym as he were wood", and "the hunted is, for her hunger wood", "they told every man that he was wode". It was still in use by the late 16th century, as per Shakespeare (Midsummer Night's Dream, Act II), "Here I am, and wood while I am within this Wood". Following the 16th century its use ends, and is ultimately replaced by Madness in common use. The Marquis of Bath, in his notes on the Old English language, makes the distinction, "We woundereþ of þi wodeness! And also of þy Madnesse!"