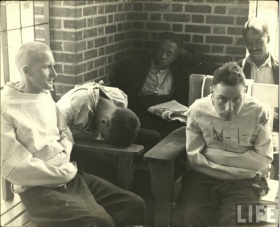 History of the Perception of Insanity[edit]

References to insanity in the ancient world are few and far between, particularly as it was unclear in the context was was a psychiatric condition, and was what believed to be a supernatural occurance. As early as the 6th century BC there are references to King Nebuchadnazzar II of Babylon as acting in a peculiar way that seems consistent with a modern mental health issue. This is an unusual portrayal in the ancient world, as it presents mental illness as being in a completely different category as possession by an unclean spirit, or as a side-effect to the movements of the moon. Common portrayals of insanity are limited to high profile sovereigns, as the majority of historical writings deals with the particulars of their odd behaviors. Some European monarchs include: King Charles VI of France, his grandson King Henry VI of England, King Louis III of Bavaria, and his nephew King Otto, King George III of the United Kingdom, King Christian VII of Denmark, King Charles II of Spain, Queen Maria I of Portugal and the Roman Emperor Justin II.

The term Woodness was originally applied in Anglo-Saxon circles as a condition where the intelligible mind is separated from the vegetative soul. This appeared to be unaffiliated with either Platonic or Aristotelian conceptions of the anima/animus. Woodness is developed as a social concept from the prior Germanic theory of mind. As a concept, Woodness appears to mean that an individual is literally 'out of their mind'; or rather, that the rational mind is in a disconnected relationship and possessed by a daemon. Traits attributed to 'Woodness' might be related to the modern notion of Schizophrenia, or split-mindedness. However, no clear reason for outset is explained in any text from that period. However, this mental condition is reflected frequently in popular English literature as late as Geoffrey Chaucer's work 'Canterbury Tales', in the 14th century. Lines alluding to Woodness as mental illness include, "What sholde he studie and make hymselven wood", "armed, and looked grym as he were wood", and "the hunted is, for her hunger wood".

Dementia Praecox, from the Latin meaning "premature dementia", referred to a chronic, deteriorating psychotic disorder characterized by rapid cognitive and affective disintegration, usually beginning in early adulthood. It was first coined, in its Latin form, in 1891 by Arnold Pick (1851–1924), a professor of psychiatry at Charles University in Prague. His brief clinical report described the case of a person with a psychotic disorder resembling what was then known as Hebephrenia. It was later popularized by German alienist Emil Kraepelin (1856–1926) in 1893. Kraepelin regarded the major psychoses as naturally occurring disease entities, and therefore they have a bodily grounding. He further reduced the complex psychiatric taxonomies of the nineteenth century by dividing them into two classes: manic depressive psychosis or dementia praecox. This division is commonly referred to as the Kraepelinian dichotomy and it has had a significant and fundamental impact on twentieth-century psychiatry, though it has also been questioned. It is currently the basis for the DSM's separation of Affective Disorders from Psychotic Disorders.

The primary disturbance in dementia praecox was said to be of the fluidity of cognition. Cognitive disintegration refers to a disruption in cognitive or mental functioning such as in attention, memory, and goal-directed behavior. Kraepelin contrasted this with manic-depressive psychosis, in which he included not just what would be termed bipolar disorder today but also other forms of mood disorder, including major depressive disorder. However, Kraepelin himself noted cases in between and eventually accepted that it was not possible to distinguish his categories on the basis of cross-sectional symptoms. Indeed, a mixed diagnosis of Schizoaffective disorder has also developed.

From the outset, dementia praecox was viewed by Kraepelin as a progressively deteriorating disease from which no one recovered. The three terms that Kraepelin used to refer to the end state of the disease were "Verblödung" (deterioration), Schwachsinn (mental weakness) or Defekt (defect). Although "dementia" is part of the name of the disease, Kraepelin did not intend it to be similar to senile dementia and rarely used this term to refer to the end state of the disease. However, by 1913, and more explicitly by 1920, Kraepelin admitted that although there seemed to be a residual cognitive defect in most cases, the prognosis was not as uniformly dire as he had stated in the 1890's. Still, he regarded it as a specific disease concept that implied incurable, inexplicable insanity.

This formal psychiatric diagnosis was eventually joined from 1918 to 1952, and later replaced, with the modern clinical sub-divisions of Schizophrenia. It was still used actively in French Psychiatric circles well into the 1970's.