The Erie County Almshouse was established in 1841 and built three and a half miles west of the city of Erie. It stood in the vicinity of 23rd and Pittsburgh Avenue in what is now Millcreek Township. The building stood four stories tall, measuring 190 by 57 ft, with a rear wing of three stories extending off the rear measuring 84 by 32.5 ft. The building was constructed of brick and featured three towers, one at the center and one on either end of the building. The building was built to accommodation a population of 270 poor, 135 of each sex. In 1840 the building cost to the county was $1,065.00, which was levied from taxes 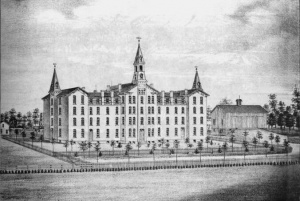 The hospital sat on 105 acres of land which was given to it by the state. All the land was under cultivation, with six being set aside for garden husbandry. The crops grown were wheat, barely, corn, and various vegetables which were all used to feed the inmates of the institution. An exercise yard was available at all times to the resident paupers.

At some point around 1918 the Original Almshouse complex was abandoned when a new one was opened in Girard PA. This building remains to this day, however is now in use as a private nursing home.

The Almshouse maintained a cemetery located on its grounds where the indigent dead as well as the unidentified from the county were buried beginning in the mid 1800s. This cemetery was used until December 2, 1920, when a 72 year old man became the 690th, and final soul to be laid to rest at the Pittsburgh Ave. location. At this time, burials were moved to the new county potters' field in Fairview township at Dobler Farm. Over time this cemetery grew to hold the remains of over 1000 unknown and unclaimed dead of Erie County. As happens all too often, the old potters' field located on Pittsburgh Ave. was forgotten, only being rediscovered in 1977 when a newpaper discovered it on a map of a proposed industrial park for the site. The remains of 443 of the dead where exhumed and moved to the Dobler Farm Potters' field, where they were interred in seven vaults and given proper religious ceremony. The remaining 247 remain at the original site to this day, buried under roads, houses, and utility lines. A 1991 news story brought attention to the neglected County Potters' Field and public support for its maintenance. As a result, in 1994 the cemetery was rededicated, adding a memorial plaque and a history of the cemetery. The plaque reads: On This Memorial Weekend May 27, 1994

We Rededicate This Cemetery To All Those Souls Who Rest Here, The Sanctity of This Ground is a Reminder That All Life is Precious, And in Death We Are All the Same--- ---God's Children