The Haverford State Hospital was a state psychiatric facility outside of Philadelphia, PA., which operated between 1962 and 1998. Its construction was intended to alleviate overcrowding in neighboring Norristown State Hospital, Embreeville State Hospital and Philadelphia State Hospital, all of which were nearly a century old at the time of its construction. However, it was built during the final period of the Commonwealth of Pennsylvania's financial support of inpatient mental health centers. When it opened, it boasted modern clinical psychiatric care, which stood in startling contrast to its neighboring state hospitals. Its closure three decades later was due in part to a lawsuit from the 'Americans With Disabilities Act', as well as the growth of deinstitutionalization of state hospitals. When it closed, most of its clinical population was then transferred to Norristown. The property of the former hospital has been reclaimed by the local community. 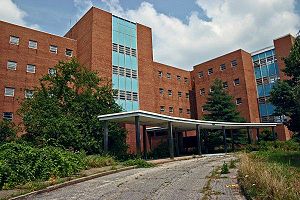 On July 20, 1953, Pennsylvania governor John S. Fine signed into law the construction of a new psychiatric hospital. The original time estimate for its construction was 1956. However, due to roadblocks thrown up by neighbors and the resistance of local interest groups, it was delayed until June 13, 1961, and did not open until October of 1962. Its first superintendent, Dr. Jack Kremens, stated that his goal was to make this facility state of the art, with the intention of leading the industry in providing superior patient care. However, his ambitions were severely limited by the small size of Haverford, and the era in which it first opened its doors. During its tenure as an active state psychiatric site, it was renowned for the body of clinical research it produced. A number of studies were completed, in association with the University of Pennsylvania, which involved the inpatient population directly. These studies usually ranged into a variety of subjects, but are still used by the psychiatric and professional psychological community. One of the most enduring of these studies was one linking schizophrenia to ongoing tobacco use.

When Haverford State Hospital was built, it was designed to be a model of luxury care for the mentally ill. Haverford State was known by some of the locals as the "Haverford Hilton", and sometimes the "Haverford Country Club", because of the expense that went into its construction and maintenance. The physical site itself boasted a four-lane bowling alley, a soda fountain, a pool and billiards room, and private rooms for each of its patients. It possessed a library containing 4,000 volumes for the access of the patient population. There was a 12,4000 sq.ft. therapy room dedicated exclusively to occupational and industrial therapy opportunities. At its opening, it had no locked doors, with the exception of its Acute Care Unit, which was quite unlike neighboring state hospitals. The wards became smaller as greater emphasis was placed on the quality of patient care.

The Admissions building, which was the only building visible from the road, was the most iconic. The top three floors of this building were reserved for acute cases-one male and one female. Each of these locked wards had independent cafeterias and day rooms. There was also a barbershop for the men, and a hair salon for the women, available to all high acuity patients during the day. As hospital protocol, it was in the staff's best interest not to keep patients on the acute ward more than ninety days. Those patients that were unable to be placed in a lower level of care were transferred to a smaller long-term acute care building on the grounds.

However, despite these aspirations and the best intentions of physicians, over the next decade Haverford became overcrowded, and clinical conditions declined significantly. With the overcrowding, hospital staff were forced to attempt to accommodate the rising hospital population. Private rooms quickly became a thing of the past, as patients' beds were set up in hallways, day rooms, or any other available space.

In 1986, a rash of elopements brought the hospital into the media spotlight. By June of that year, about eighty patients had found a way to escape, including some of whom were potentially dangerous. The public was shaken when 25-year-old mental patient, Raymond Tillger, walked off the hospital grounds on the sixth of June, and disappeared into the community. Shortly thereafter, his girlfriend was found dead by his hands. However, following a lengthy trial, Tillger was found not guilty for the 1979 slaying of his girlfriend, by 'reason of insanity'. He was arrested at the 'La Casa Pasta restaurant' in New Castle, eight days after his escape. "It is not an understatement to say that Haverford State Hospital presents a time bomb waiting to explode," wrote State Rep. Stephen Freind, after the incident. "It is only a matter of either divine providence or complete luck that thus far one of the walkaways has not seriously harmed or killed one of my constituents residing in the area or, for that matter, in any other area." Freind was appalled that as a minimum security institution, Haverford State was housing potentially dangerous patients, and began pushing the state for stronger security measures. It was a case of negligence on the part of the hospital staff, he said. "When I have frequently complained to the Director of the Hospital, Dr. Fong, he has used his standard procedure, namely waving his hands in the air and pleading helplessness," wrote Freind, calling on the attorney general to launch a grand jury investigation.

A year later, the dangerously overcrowded conditions at Haverford State again came under serious fire. In 1987 the hospital was operating at 141 percent of capacity, according to an Associated Press story, with 123 patients packed into wards designed to hold only 87. State officials and hospital administrators fought over whether to transfer patients to other hospitals or to increase funding in order to open two unused wards at Haverford State. Local officials were outraged when the state proposed to transfer long-term patients to other facilities and stop bringing new acutely ill patients to the facilities. "It's very sick people leaving Delaware County, going away from their families, away from their friends," Sandra Cornelius, Director of the Delaware County Department of Human Resources, told the Associated Press in June 1987. In July of 1987 state officials negotiated to open 34 additional beds in the hospital to relieve some of the worst overcrowding, according to a press release from Freind's office. But the hospital management did not escape hot water for long. In July, 1988, a heat wave caused temperatures in some of the non-air conditioned hospital buildings to soar to as high as 115 degrees, according to Freind and state Rep. Mary Ann Arty. The lawmakers told the head of the state welfare department that air conditioners installed in the hospital lobbies were a temporary fix, subsequently demanding central air for the buildings.

Despite efforts to control the overcrowding and to improve conditions, they continued to worsen. The hospital failed a Medicare inspection in July of 1987 because of nursing shortages. It passed a second inspection in November 1987 by moving the Medicare patients to well-staffed wards, while neglecting the others, testified former Haverford State Hospital Superintendent Dr. John Fong at his trial in 1989. The hospital housed a whopping 562 patients in August of 1987. To make matters worse, Fong was arrested shortly after retiring from his position as Superintendent in November of 1988. On Feb. 3, 1989, he was found guilty of tampering with public records in order to falsify an injury report. "Witnesses at Dr. John Fong's trial presented a picture of deteriorating conditions at Haverford State Hospital, in which employees feared Fong and blindly followed his orders, while coping with patient overcrowding and staff shortages," wrote NEWS of Delaware County Staff Writer David Bjorkgren. 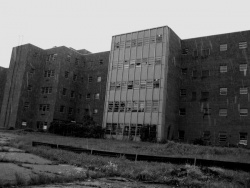 Conditions began to improve starting in 1987, and by the early 1990's the hospital had transformed itself and its dubious image, according to Silberner's report. Patients were involved in psycho-educational groups and recreation with a focus on self-help and internalizing personal change. However, the American public's sentiment was slowly turning against the idea of mental institutions as a whole, of which Haverford State Hospital was no exception. In June of 1990, Philadelphia State Hospital closed by court order, making way for a new method of decentralizing mental health services away from state hospitals, and towards community clinics. By 1996, 70,000 patients remained in state and county psychiatric hospitals. Lawyers successfully argued that under the new 'Americans With Disabilities Act', mentally ill people should be kept in the least restricted setting as possible. This decision of the courts put the final nail in Haverford State's coffin, as it deemed inpatient care clinically unnecessary in the context of late 20th century psychiatry. When the closing of the site was announced by the state in 1997, there were 262 patients remaining in residence. By June 3, 1998, 54 of those had been placed in care in the community, and 172 had been transferred to similar accommodations at Norristown State Hospital. The buildings were locked, and the land was sold directly to Haverford Township for future care. The township had struggled to find a proper use for the former hospital property.

Outpatient community clinics were established in Delaware County in response to the absence of the former state hospital. These clinics, which are county funded, are: Northwestern Human Services in Sharon Hill, PA and Crozer-Chester Medical Center in Chester, PA.

On November 14, 2006, the Haverford Township Board of Commissioners approved an agreement for the sale of, and preliminary land development plans for the former hospital. The Haverford Reserve development will include one hundred carriage homes and 198 condominiums, plus the Township of Haverford will ultimately have several athletic fields and over 120 acres for recreation. On April 5th 2007, the Pennsylvania Attorney General filed an indictment against 5th ward commissioner Fred C. Moran, in conjunction with the sale of the state hospital property. This scandal involved Fred Moran disclosing the bids of other potential developers, that were supposed be confidential, to one contractor in particular. He is currently awaiting trial.

After sitting vacant several years, the buildings of Haverford State Hospital had become dilapidated and damaged beyond repair. The buildings of the complex were reduced to a shell of what they once were. The first buildings to come down were the administration and recreation buildings, followed by the extended treatment and geriatric wards. The final two buildings to be demolished were the boiler plant, and the five story hilltop building, which finally fell on January 17th, 2008.