Hippocrates (460 BC – c. 370 BC) was an ancient Greek physician, of the age of classical Greece. He is considered one of the most outstanding figures in the history of western medicine. Hippocrates is referred to as the father of western medicine in recognition of his lasting contributions to the field as the founder of the 'Hippocratic School of Medicine'. This intellectual school revolutionized the view of the practice medicine in ancient Greece, establishing it as a professional discipline distinct from other fields that it had traditionally been associated with. Previously the treatment of the local ill was conducted by temple priests and the local apothecary. 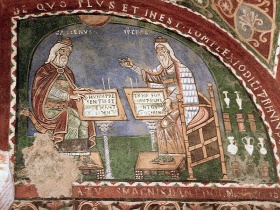 However, the achievements of the practitioners of Hippocratic medicine, and the actions of Hippocrates himself are often commingled. There is very little known about Hippocrates himself and the de facto tenants that he taught. Hippocrates is commonly portrayed as the paragon of the ancient physician, credited with coining the now famous Hippocratic Oath, still in use today. He is also credited with greatly advancing the systematic study of clinical medicine as a scientific discipline, summing up the medical knowledge of all previous schools, and prescribing practices for physicians through the Hippocratic Corpus.

As it relates to psychiatry in particular, Hippocrates was one of first clinician to theorize the existence of mental health as a medical condition. In contrast to the general population, and the common sense of ancient Greece, he refused to believe that individuals with mental illness were possessed by a variety of spirits (daemons), or that a vindictive god was responsible for their erratic behavior. This theory set the basis for all mental health procedures and practices in the centuries to follow. However, while he correctly identifies this condition as somatic in origin, he does not describe it as being a function of the central nervous system. Instead, he posits that it is a function of an imbalance of the body's natural humors which can be repositioned through bloodletting. Hippocrates was also able to recognize that chronic diseases of the body might manifest itself with cognitive, and sometimes psychotic features. He also separated Insanity proper from delirium that might result from a somatic condition.

Clinically Hippocrates also makes the first subdivision of mental disorders into separate categories based upon their symptoms. He recognized melancholic, as well an manic states, and was able to recognize these as being separate from more serious psychotic conditions. from Hippocrates' writing, he states another distinction, clearly stating that "nervous diseases" and convulsions sometimes developed into insanity, after which there was a general poor prognosis and low probability of recovery. This systematic approach to psychiatric medicine, and the treatment of insane patients, remained relatively unchanged until the late 19th century and the development of more modern clinical practices.

In art, he is frequently paired with the equally famous Latin physician from the 3rd century AD Galen.