After World War 2, the state of Indiana decided it needed a separate facility for with children with psychological illnesses. In later years also housed adults to ease overcrowding at Central State Hospital several miles away. Through the late 1970's the hospital came under scrutiny for patient abuse complaints, it remained open however. The hospital moved from its previous location in 1996 to the now former Veterans Administration building on Cold Spring Rd. Indiana University plans to demolish the old hospital building to expand Wishard Memorial Hospital.

As of December 2020 the Cold Spring location is now closed, having its patients transfered to the new "Neuro-Diagnostic Institute" on the East side of Indianapolis in spring of 2019. 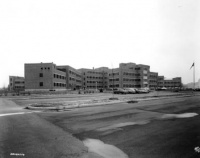