Thomas Story Kirkbride (July 31, 1809 - December 16, 1883) was a physician, an alienist, advocate for the mentally ill, founder of the Association of Medical Superintendents of American Institutions for the Insane (AMSAII), a precursor to the American Psychiatric Association [1], as well the first Superintendent of the Institute of the Pennsylvania Hospital. He would remain in tenure at Pennsylvania Hospital for the Insane for forty-three years, during the longest and most influential period of the hospital's history. Dr. Kirkbride is also regarded as being one of the fathers of American Psychiatry, along with that of Dr. Benjamin Rush. He is best remembered for the design of 19th century psychiatric hospitals, which bear his name.

Thomas Kirkbride was born into a Quaker family in a farmhouse in Morrisville, PA. Both branches of his family were some of the earliest English settlers of the Delaware Valley region, who came to the Americas with William Penn in the late 17th century. His father's parents were of the country of "Kirkbride' in Cumberland County, England. Upon Settling in America they established a plantation in lower Bucks County, which remained family property until it was sold in 1867. His father, John Kirkbride (d.1864), built the house which Thomas lived in as a child on the family estate. His mother, Elizabeth Story, was a resident of Newtown Township.

After attending a local private school in his neighborhood in Morrisville, he attended a classical school in Trenton, NJ, across the river from his home. Afterwards, he spent a year specialized in Mathematics in a school in Burlington, NJ. After this initial preliminary education, he spent a year on his father's farm in Morrisville, which he later related was beneficial for his long-term health. During this time he read a treatise by Dr. Nicholas Belleville, a French surgeon who had come to the United States with Lafayette during the American Revolution, and who was residing in Trenton, NJ. In 1831, Thomas Kirkbride began his medical education under Dr. Belleville, when he was eighteen.[2][3] After receiving a medical degree from the University of Pennsylvania in 1832, Kirkbride did his residency at Friends Hospital in Philadelphia. Following which, he was briefly employed at Pennsylvania Hospital as part of their regular medical staff, from 1833-185. It was originally his intention to become a surgeon, and shortly thereafter he had his own practice in Philadelphia, lasting from 1835 until 1840.[2][3]

In 1839, he married Ann West, daughter of Joseph R. Jenks, a wealthy Philadelphia merchant, and Manager of Pennsylvania Hospital. She would bear him a daughter and a son, before her death in 1862. 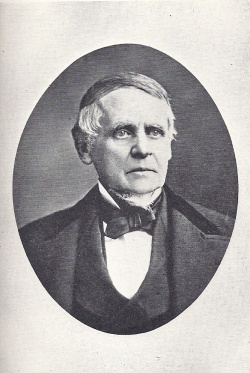 Despite having a private practice independent of hospital affiliation, Kirkbride was very familiar with the staff and administration of Pennsylvania Hospital. The resignation of his peer, Dr. John Rhea Barton, in the autumn of 1840, lead him to believe that he would be appointed to a surgeon position shortly. However, the Board of Manager instead offered him a new title of Superintendent and Psychiatrist-in-chief of the recently established Pennsylvania Hospital for the Insane, later known as the Institute of the Pennsylvania Hospital. This was not immediately accepted, as the field of psychiatry was considered a lower medical profession in the 19th century. Most of his friends regarded this move to be not in his best interest professional, and strongly advised against it. However, the prospect of having control over the construction, design and management of this new facility, as well as the protocol of the young field was also titillating. Without any solicitation, or even an acceptance of the position, he was elected by the board as 'Superintendent' on October 12, 1840.

As the first profession measure of his tenure as Superintendent of Pennsylvania Hospital for the Insane, he toured a number of local hospitals for two months, after a careful examination and analysis of the nation's use of inpatient hospitalization for the mentally ill. Following this tour in December of 1840, he took up residency in an old mansion house located on the new hospital grounds, where he would continue to reside for the remainder of his life.

In 1844, Dr. Kirkbride was one of the original thirteen members who founded the 'Association of Medical Superintendents of American Institutions for the Insane' (AMSAII), serving as its secretary from 1848 to 1855, its vice-president from 1855 to 1862, and finally, as its president from 1862 to 1870.[4] He took the greatest interest in these proceedings, and was noted for never missing a single meeting, which took place at Pennsylvania Hospital in Philadelphia. The AMSAII would change its name in 1895 to the American Medico-Psychological Association, and change it again in 1921 to the American Psychiatric Association. Its first proposition was dedicated to the clarification of their intent: "It is the unanimous sense of this convention that the attempt to abandon entirely the use of all means of personal restraint is not sanctioned by the true interests of the insane".

Despite the construction of this new facility in West Philadelphia by Pennsylvania Hospital, by 1853 all wards of the hospital were full. As a measure of restraint, all new admissions were declined and deferred to Friends Hospital to the northeast of Philadelphia. Dr. Kirkbride made an appeal to the Board of Managers to expand their operations yet again, and amend the chronic overcrowding at the hospital. In this year he wrote "An appeal for the Insane", as well as multiple clinical and newspaper articles, attempting to convince the general public of the need for facilities such as the one he was managing. From the fruits of these labors he was able to procure the funds for a construction of a separate male department a short distance from its female equivalent.

Kirkbride pioneered what would be known as the Kirkbride Plan, to improve medical care for the insane, as a standardization for buildings that housed the patients.[5] Kirkbride's influential work, On the Construction, Organization, and General Arrangements of Hospitals for the Insane with Some Remarks on Insanity and Its Treatment, was published in 1854. This volume was reprinted in 1880, 1874 and 2011.[2] Kirkbride had been influenced by the Quaker-founded York Retreat in England whose leader, Samuel Tuke, had published an account entitled, Practical Hints on the Construction and Economy of Pauper Lunatic Asylums (York, England, 1815). The Tuke family had instituted in their hospital a "moral treatment" approach to care for patients, which centered upon humane and kindly behavior.[2] The Superintendents’ Association made efforts to institute this approach in their hospitals.[2]

Dr. Kirkbride was also heavily involved in civic affairs within the city of Philadelphia itself, as well as that of the commonwealth. He was a member of the College of Physicians, the Philadelphia County Medical Society, the Franklin Institute, the Historical Society of Philadelphia, the American Philosophical Society, and an honorary member of the British Medico-Psychological Association. For ten years he remained a trustee of the Pennsylvania State Lunatic Asylum, later known as Harrisburg State Hospital, as well as the Pennsylvania Institution for the Instruction of the Blind. In 1880, LaFayette College honored him with an honorary Doctorate in Law (LLD). 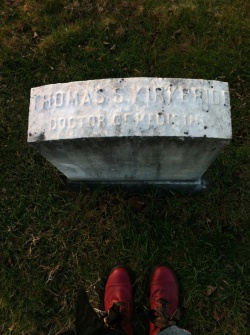 In March of 1883, he developed Typhoid-Pneumonia, which lingered, but was severe and lasted a total of nine months. Dr. Kirkbride died peacefully of his illness on December 16, 1883, at his home at the Pennsylvania Hospital for the Insane.[4]. He was survived by his second wife, Eliza Butler Kirkbride (1836-1922), their four children- Franklin Butler Kirkbride (1867-1955), Thomas Story Kirkbride Jr. (1869-1900), Elizabeth Butler Kirkbride and Mary Butler Kirkbride. He was also survived by his progeny from his prior marriage, Anne Jenks Kirkbride and Joseph John Kirkbride. His friend and colleague Dr. S.D. Gross, eulogizing his memory, described him: "In personal appearance Dr. Kirkbride was eminently attractive. He was of medium height, with a fine physique, and a well-shaped head, and a continence highly expressive of benevolence and warmth of heart. His voice was sweet and gentle, and his presence and demeanor were such as to win at once the affection and confidence of his most wayward patients."

Two of his sons would later attend the University of Pennsylvania and attain the title of "Doctor of Medicine". Kirkbride's eldest son, Joseph John Kirkbride, completed his education and received his MD in 1872. He maintained a practice in Philadelphia for a number of years, and was best remembered for his photography of 19th century America. His youngest son, Thomas Story Kirkbride, Jr., also attained his MD in 1893, and was in practice until his death seven years later.

Dr. Kirkbride was buried in a family plot in Laurel Hill Cemetery inside the city limits of Philadelphia, PA. His memorial is small pale stone, as is traditional with pious Quaker custom. The attending staff of the grounds say that visitors leave nuts there as a token of goodwill. He is buried next to two other Kirkbride graves, one belonging to his son Joseph, the other has fallen into disrepair, as the inscriptions on their top edge have been faded by erosion.

His second wife, Eliza Butler Kirkbride, was active in the Philadelphia Public School system for several decades after the death of her husband. Following her death, she left a substantial amount of money to the care of the school district. The "Eliza B. Kirkbride school" is named in her honor, which is still in active use as a grade school. Mrs. Kirkbride frequently spoke warmly of her husband, stating that he was "generous sympathy for all who suffer made manifest in his every thought and action".

The Art Of Asylum-Keeping - Thomas Story Kirkbride and the Origins of American psychiatry, Nancy Tomes, University of Pennsylvania Press (1994)