Louis II, or Ludwig II, was King of Bavaria from 1864 until shortly before his death in 1886. He is sometimes called the Swan King (English) or der Märchenkönig. Ludwig was sometimes also called "Mad King Ludwig", though the accuracy of that label has been disputed. His younger brother, Otto, was considered to suffer from Insanity, as well as his nephew, also named Otto. Thus the claim of hereditary Madness was convenient. Because Ludwig was deposed on grounds of mental incapacity without any medical examination, questions about the medical "diagnosis" remain controversial. Adding to the controversy are the mysterious circumstances under which he died. King Ludwig and the doctor assigned to him in captivity at Castle Berg on Lake Starnberg were both found dead in the lake in waist-high water, the doctor with unexplained injuries to the head and shoulders, the morning after the day Ludwig was deposed. One of Ludwig's most quoted sayings was "I wish to remain an eternal enigma to myself and to others."

Ludwig is best known as an eccentric whose legacy is intertwined with the history of art and architecture. He commissioned the construction of two extravagant palaces and a castle, the most famous being Neuschwanstein. King Ludwig is generally well-liked and even revered by many Bavarians today, many of whom note the irony that his supposed madness triggers the architecture that has made Bavaria a haven for tourists. However, during his lifetime his spending strained the local economy, and became burdensome on the aristocracy. Some noblemen, seeking a cause to depose Ludwig by constitutional means decided on the rationale that he was mentally ill, and unable to rule as sovereign. They asked Ludwig's uncle, Prince Luitpold, to step into the royal vacancy once Ludwig was deposed. Luitpold agreed, so long as the conspirators produced reliable proof that the king was in fact helplessly insane. 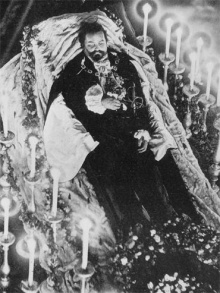 In early June of 1886, a report was finalized and signed by a panel of four psychiatrists: Dr. Bernhard von Gudden, chief of the Munich Asylum; Dr. Hubert von Grashey (who was Gudden's son-in-law); and their colleagues, a Dr. Hagen and a Dr. Hubrich. The report declared in its final sentences that the king suffered from recurrent paranoia, and concluded, "Suffering from such a disorder, freedom of action can no longer be allowed and Your Majesty is declared incapable of ruling, which incapacity will be not only for a year's duration, but for the length of Your Majesty's life." The men had never met the king except Gudden, once, twelve years prior. The Bavarian Parliment moved to have the king removed from the throne following this report, and his brother King Otto, was elected the new king following his absence. This proved to be unhelpful for the financial stability for Bavaria, as his brother also exhibited symptoms that were potentially psychotic and had to be hospitalized. Three days following his forced abdication from the throne of Bavaria, he and his treating physician were found dead on Lake Starnbegr under unexplained circumstances. Ludwig's death was officially ruled by the state as a suicide by drowning, but the official autopsy report indicated that no water was found in his lungs pre-mortum. The evidence for his death is comlex. Ludwig had been a very strong swimmer in his youth, the water was approximately waist-deep where his body was found, and he had expressed suicidal feelings during the crisis. His doctor's body exhibited blows to the head and neck, and signs of strangulation, leading to the suspicion that he may have been potentially strangled by Ludwig himself.

Ludwig was deeply peculiar and irresponsible, but the question of clinical insanity remains unresolved by modern researchers. The neurologist, Heinz Häfner, disagreed that there were signs for insanity in the young king. Others believe he may have suffered from the effects of chloroform used in an effort to control chronic toothache rather than any psychological or psychiatric disorder. His cousin Empress Elisabeth of Austria held that "The King was not mad; he was just an eccentric living in a world of dreams. They might have treated him more gently, and thus perhaps spared him so terrible an end."

Ludwig became engaged to Duchess Sophie Charlotte in Bavaria, his cousin and the youngest sister of his dear friend, Empress Elisabeth of Austria. The engagement was publicized on 22 January 1867, but after repeatedly postponing the wedding date, Ludwig finally cancelled the engagement in October. Ludwig never married following this episode, but Sophie later married Prince Ferdinand, Duke of Alençon.

Throughout his reign, Ludwig had a succession of close friendships with men, including his chief equerry and Master of the Horses, Richard Hornig, Hungarian theatre actor Josef Kainz, and courtier Alfons Weber. He began keeping a diary in which he recorded his private thoughts and his attempts to suppress his sexual desires and remain true to his Roman Catholic faith. These diary entries, along with private letters and other surviving personal documents, show Ludwig's lifelong struggle with his orientation. While homosexuality had not been punishable in Bavaria since 1813, the Unification of Germany in 1871 under Prussian hegemony changed this. Additionally, in the psychiatric community homosexuality would remain classified as a mental disorder until the early 1970's. This, in combination with his erratic personal behavior, spending habits and family history culminated in his perceieved madness by his courtier, particularly in the face of both German Catholic and Victorian mores.